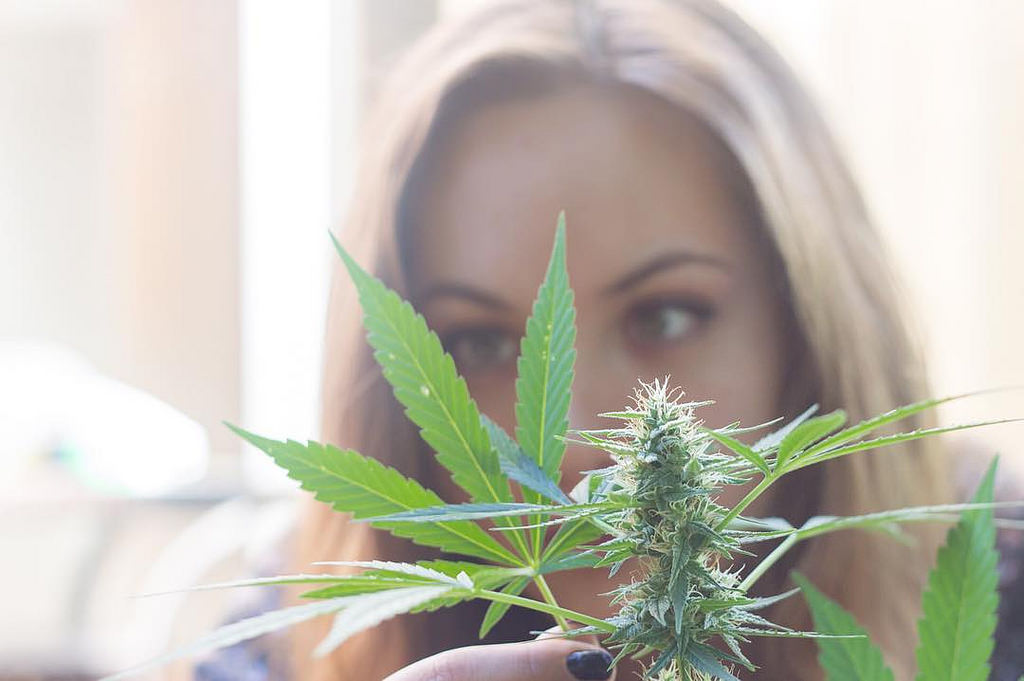 Generally speaking we can distinguish two main categories and types of weed plants, namely Sativa and Indica. To help you in your final choice we will provide you with some background information about their origins, their characteristics and their effects when smoking.

Indica weed plants are the smaller of the weed plants. They usually stay under 6 feet (or 180 centimeters). The leaves of an Indica weed plant are normally small and thick with broad leaf fingers. The color of the leaves varies from dark and deep green to purple. Often Indica weed plant leaves become more and darker purple as they reach their maturity. The buds of an Indica plant are usually thick and dense. They mature around the beginning of September. Also the buds vary from deep green to deep purple depending on their maturity. Indica weed plants are ideal to grow in colder climates or under colder cultivation room conditions. For the origins of the plant we would advice you to go on reading this article.

Next to the Indica weed plant, we also have the weed plants which can be categorized under the Sativa main weed plant category. A Sativa weed plant is much taller than its Indica counterpart and it can reach heights ranging from 8ft to even 12ft (240 cm to 360 cm). Some even surpass 25 ft or 750 cm. The Indica leaves can be recognized by their long and thin finger leaves. The color of the leaves varies from light green to yellowish, although there are also darker green variants. Also the buds of an Indica weed plant are long and thin. These buds become reddish or purple as they reach their maturity. Although also the leaves of the Indica plants are smoked, smokers have strong a preference for the high-quality top of the plant. Midwestern varieties of the Indica weed plant mature around August or September, while their equatorial Indica counterparts reach their maturity between November and January.

Although in the world of weed a clear distinction is made between Indica and Sativa weed, scientologists have not yet been able to make a clear distinction between both plant species. It is not clear yet if these two plants originate from a completely different background and genus or whether they do have some overlapping species background. Regardless of this still unanswered question, it is very clear that when mankind started to discover the curative and stimulating cerebral effects of weed there already were two clearly distinguishable lines. The Indica weed line grew in the wild and was cultivated in the southern Asian en Indian area in countries like Afghanistan, India, Tibet, Nepal and Pakistan. The Sativa weed line for its part originates from several countries around the equator like Jamaica, Thailand, Venezuela and Colombia. Although first growing in the wild, both lines were finally discovered by mankind and were originally grown in vegetable gardens for specific uses. Before mass production and internationalization Sativa was used by the local inhabitants for personal smoking and Indica was used to make hashish and kif. Some hundreds to thousands of years later only Sativa and Indica found their way into the hippie culture. This was the start of their inevitable globalization. Luckily for all us!

Not only there is a clear origin and physical difference between both Sativa and Indica, there is also a difference in effect. The general saying goes: “Sativa gets you high while Indica gets you stoned.” When smoking weed which has a mainly Sativa background you will immediately notice a very clear, cheerful and lively cerebral high, while smoking weed with a mainly Indica background on the other hand will more likely give you a so-called skunk, lazy and feel good stoned feeling. When smoking crossed weed you will get a crossed mixture of feelings. Depending on the ratio of Indica and Sativa you will mainly become high or stoned.

A hybrid weed plant is a weed plant that has been crossed by using a Sativa male plant and an Indica female plant or vice versa.  When shopping for weed plants or weed plant seeds there is a very big chance your seeds or plants will be hybrid ones. Most amateur growers and also large part of the professional growers only have hybrid weeds plants. Also most weed type categories have a hybrid background. Most of the time hybrid weed is somewhat more complex in the effect it causes. Perfectly understandable of course if you know a hybrid weed plant is a mix of two other plants.

But why would one start crossing two totally different types of weed plants? The answer is very simple. As with so many plants and even animals the only reason to start crossing weed plants is to make them better or to adapt them to your personal preferences and desires. A hybrid weed plant in fact combines the best of both worlds. Depending to which one your personal preference goes out to of course. Weed plant professionals and experts have looked at the typical characteristics of different Indica and Sativa strains and crossed the best ones to create super strains. These super strains possess the best of both parents. As said before, the best is of course a very subjective aspect. Therefore the ratio Indica Sativa is often altered to create new weed plant types with other characteristics and effects. Hybrid weed plants will in any case be Sativa or Indica dominant and this will also show in the effects of smoking that particular weed.

A common misconception, for sure among beginning amateur smokers, is the fact hybrid weed plants would endanger your health and have unpleasant side effect. Hybrid weed is no more dangerous or no unhealthier than any other weed. Hybrid weed might cause a stronger effect when smoking it for the first time, but that’s it. The chance you are already smoking hybrid weed is by the way very big.

When choosing weed one should first determine whether he or she would prefer to cultivate its weed indoors or outdoors. Next it is matter of choosing weed with your favourite aroma, effect and taste. To give you some ideas of the main subcategories of weed we have listed some of the most popular types of weed below. From one shop to another or from one weedfarm to another there might be subtle differences in these characteristics we describe.

The use of weed for medical purposes can be described as the use of weed to serve as a medicine or at least as an herbal therapy. Weed has been used for ages as a form of medicine. Some evidence of the medical use of weed dates back to 2.737 BC. Although in most countries weed for medical use is still forbidden and illegal, there are several countries which do allow weed to be used as a medicine. These countries include Canada, The Netherlands, Spain, Germany, Italy and Finland. The use of medical weed in the US varies from one state to another.

Although some might claim weed only has negative effects and weed only harms the body, it has been scientifically proven that the use of weed also has a lot of beneficial effects which might help people suffering from a certain disease, disorder or feeling. Let’s take a look at when weed might be a good alternative treatment or additional treatment to treat certain diseases.

Next to all the above benefits, smoking weed has also proven to be efficient against vomiting, pain in general, migraine, bowel disease, neurogenic pain, asthma, insomnia, lack of appetite, alcohol abuse, epilepsy, dystonia, arthritis, atherosclerosis, depression, hepatitis C and many more.

One must know that although the criticism, marijuana, weed or whatever you like to call it has enough scientifical evidence to be considered beneficial and even legitimate for medicinal use. Smoking marijuana does cause side effects of course but one should wonder though if the possible ‘disadvantages’ can equal out the many benefits of smoking weed.

Next are the disadvantages of using autoflowering weed plants or seeds.